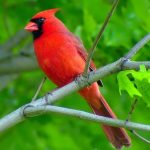 Stan Searles, curator of birds and aquatics at Cleveland Metroparks Zoo and two of his colleagues Jason Schafer and Jason Wark, walked 31 miles on a hike to promote the protection of bird habitats. The hike, which started on the morning of May 28, was part of the UltraWalk, an event sponsored by the Western Cuyahoga Audubon Society. The Society was established in 1975, and works to educate the public about conservation of the natural world through member involvment in community outreach and chapter activities.

The chapter’s president, Tom Romito, said that the event was designed to raise awareness of the Important Bird Area along the Rocky River which runs through Strongsville.

Searles, Schafer and Wark began their hike at the Buzzards Roost in the Metroparks Hinckley Reservation, then startedoff north on Ridge Road to the Breckville and Mill Stream Run reservations. They made a short stop at Bonnie Park in Strongsville to give an update on their hike.

Searles said, “It’s going very well. Our overall pace is a little better than what we expected, and the weather is just perfect.”

Last year, the UltraBird, a companion event to the UltraWalk, made its fourth appearance in the Important Bird Area. This year, it was a three-day event held from May 26 to 28.