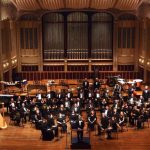 Now is the time to show your support for local talent in Strongsville Community Band’s 2011 Summer Concerts. Directed by Maestro Ken Mehalko, this phenomenal band is made up of the most talented musicians in the area.

Mehalko promises an exciting selection of music with something to please every musical palate. The majority of performances in the series of concerts are scheduled for Friday evenings. The season kicks off on June 17, at 7:30pm in the gazebo on the City’s Commons. On June 30, another performance is scheduled at 7:30pm inside Baldwin-Wallace College’s Kulas Hall. The third concert is scheduled for July 1 at 7:30pm in the Strongsville Historical Society’s Village. On July 8 at 7:30pm, the band will return to the City’s Commons. They will perform at Ehrnfelt Recreation Center on July 29 at 7:30pm and again on August 5, 7:30pm with special guest the Belgian Band.

The final summer concert is slated for August 21 at 6pm in Hudson, with Loras John Schissel. In case of inclement weather, the make-up concert will be at 7:30pm on August 28. Music lovers will do well to check out this concert series featuring Strongsville’s most talented musicians.